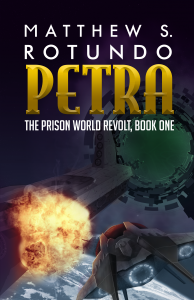 It is the ultimate prison. Inmates from all of Ported Space are dumped there, forgotten, and left to survive however they can. Hope dies. Escape is impossible.

Disillusioned war hero Kane Pythen comes to Petra on a fact-finding mission, but gets caught in an uprising that threatens to expose a shattering secret. And Rolf Ankledge, Petra’s ruthless warden, will stop at nothing to keep it from reaching Ported Space. If Kane involves himself, he risks losing everything he has. If he does nothing, he betrays the last shreds of his ideals.

The prison break of the millennium is on. Now Kane must race against time and vicious forces from all over Petra if he ever wants to see his wife and daughter again.

Where To Buy Petra

Worse, the expedition uncovers a plot to seize control of Petra that could kill millions, including Kane and his friends. The shadowy forces in Farside are on the move, too, intent on eliminating all enemies. And in Ported Space, the powerful Petra Compact is hunting for the explosive prisoner records that were smuggled offworld–which have fallen into the hands of Kane’s wife, Tayla . . .

Where To Buy Petra Released 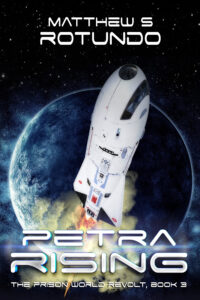 In the ten years since they seized control of Petra, now called Haven, Kane Pythen and his allies have struggled to build a civilization strong enough to withstand the backlash they know is coming from the Petra Compact.

But an eleventh-hour betrayal leaves them defenseless, and old wounds threaten to tear their community apart. Kane forges a desperate plan—one that might brand him as a criminal, if it doesn’t get him killed first. Enemies thought long defeated re-emerge, war with the Bone Tribes brews in Mainland, and Kane’s wife Tayla is about to arrive with a warning that the Compact is right behind her.

The battle for freedom reaches its climax. Kane, Tayla, and their friends face the ultimate sacrifice. Will they will rise…or fall?

Petra Rising is the third and final book in The Prison World Revolt series.

Where To Buy Petra Rising